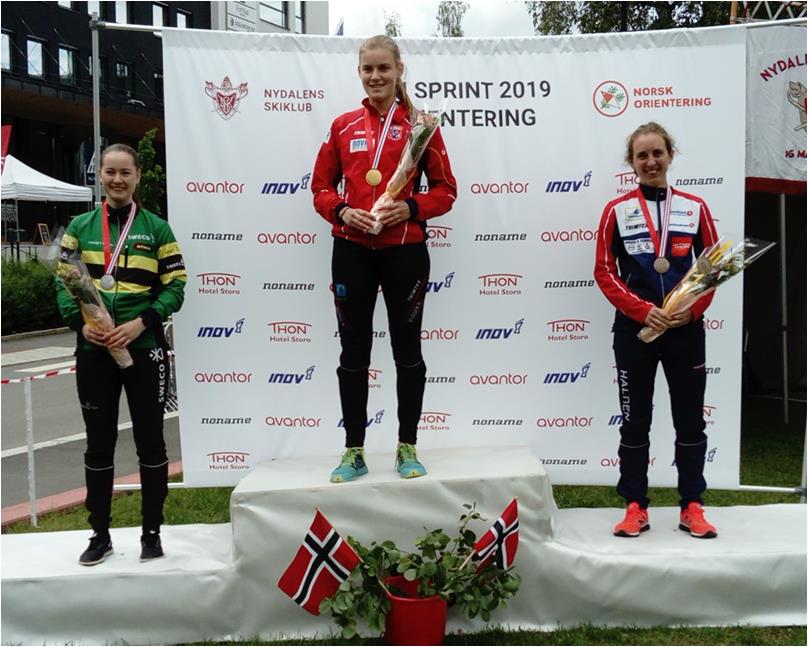 With no second JWOC trial this year to fill the gap between the ONZ Champs and Queen’s Birthday there has been a bit of a lull, notwithstanding events on the various local scenes. Following the naming of the JWOC and WOC teams, in mid-month there was a successful HP camp held in Auckland, largely, but not exclusively aimed at those going to JWOC.

Congratulations to those named in the team for WOC2019 to be held in Sarpsborg, Norway from 12-17 August. This will be the first only forest WOC since the admission of sprint orienteering to WOC, and there is a quite compressed programme that sees 4 races in 5 days.

The WOC team will be managed by Malcolm Ingham.

Congratulations also to those now named in the full JWOC team for Aarhus in Denmark, with JWOC taking place from 6-13 July.

Finally, while listing team selections, the NZL Pinestars team to run at Queen’s Birthday (this coming weekend) is:

This year the Key-Aspin Trophy will be awarded, for the first time, on the basis of the combined results of the home and away legs rather than separately on each.

Omitted from the standings in the last HP News were those for the NOL team competition. As previously flagged, this year this is based on the 3 best individual scores for each region from the ONZ Champs individual events , the ONZ relay, and the sprint relay to be held at Queen’s Birthday. After the ONZ Champs, helped to a large extent by their phenomenally successful relay teams, Southerly Storm have a commanding lead while Northern and Central are presently fighting it out for runner-up.

This took place over the weekend of 18/19 May under the guidance of Devon Beckman. What follows is Devon’s colourful report on the weekend.

“With JWOC only 5 weeks away, and more importantly schools team trials/Aus/NZ Test Match/Superseries (NOL please – ed!) round/whatever other competition is on that weekend/Queens Birthday coming up very fast, it was the perfect time to have a training camp.

The main focus of the camp was on intensity and pressure, with each training geared towards putting the athletes under pressure that they would feel at a big race, while also making them orienteer at speed and intensity that they would incur in race conditions. The idea being to simulate as closely as possible the conditions of big races to make those feelings more familiar, comfortable, and therefore be able to perform better under them.

With only two days of camp the weekend was chock full of orienteering.

Saturday morning started with a few problems, namely a broken down car and some miscommunication of being at the wrong entrance to Woodhill Forest. Only an hour of time lost and everyone was off onto the first exercise – distraction, with the idea being to distract your partner as much as possible so that they would make a mistake, while the person navigating had to not succumb to said distraction and nail the control.

This was followed by some Mass Start Forked Orienteering Intervals, with the Men and Women mass starting amongst their respective groups and running a series of short fast intervals, with random forking, to simulate high pressure and high speed orienteering. This lead to some catastrophic mistakes (especially in the questionably mapped low vis pine) and very burnt out legs.

After a brief break for lunch we had a Middle Distance simulation, with quarantine, set start times, epic spectator run through and arena commentary from the great Per Forsberg. On the line was free dinner, and those taking home the wins were Tommy Hayes and Tegan Knightbridge. 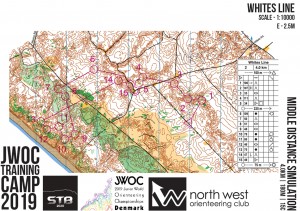 A quick stop at the Kumeu Hot Bread shop preceded the most exciting racing (training) of the weekend, with a prologue/chasing start sprint held at Epsom Campus. The times from the prologue were reversed so that the slowest would start first and the fastest start last. This was unknown before the Prologue however to ensure no “soft runs”.

The men’s and women’s field were combined for the race, and as such it was all to play for for the winner (again free dinner). After a monumental effort and some inside knowledge helping in the Prologue, Tommy had a huge task in front of him to take home the win. Jess Sewell ran exceptionally well in the prologue also, finishing with the same time as one of the men (who shall remain unnamed).

With a forked loops course the racing was tight and technical, with many loops as well as route choices to split runners up. At the early spectator run-through, it looked as though Tommy might have run out of steam and was still trailing a large pack of runners including Joe Lynch, Kurtis Shuker and Daniel Monckton, with Ed Cory-Wright hanging off the back. Jess had already caught and passed the group of girls directly in front of her and was pushing ahead too. After that the race disappeared off into the far reaches of the map and it wasn’t until the second to last control where the huge crowd that had amassed to witness the spectacle could see who would take home the goods. With light rapidly fading it was the tall slim silhouette of Liam Stolberger who bounded down the stairs towards the last control first, with Tommy Hayes having overhauled a huge amount of time to catch everyone but Liam coming down only 10 seconds later. Fortunately for Liam it was enough time to hold on to in the finish chute and he took an emphatic victory in the chasing start, with Tommy Hayes finishing only seconds behind after mowing through the field. Jess managed to fight her way to finish fastest of the women, having taken down Kaia and Penelope in the last few controls before the finish. 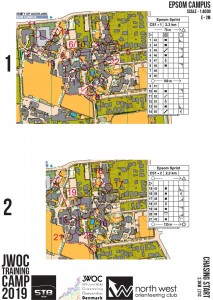 Sprint chasing start – one version of the splits

With all that excitement could only build to an amazing dinner at Mercury Plaza, known for being a popular spot amongst elite level athletes, including Dan Carter, Richie McCaw and Matt Ogden. This was followed up with a keynote on “Prepare, Perform, Recover” by coach Devon, and some deep sleep to recover from a big day.

Sunday included a long distance simulation held in conjunction with the NWOC Rogaine at Lake Kereta, using the controls from the Rogaine linked together to form a long distance. Unfortunately, some last minute changes rendered the pre-printed maps useless, so we reverted to the old school ways of red pens and rulers.

Kurtis Shuker took home the win (but no free dinner) in the men’s while Briana Steven closed home the weekend on a scale of 1 – excellent with a 10/10 run to win in the women’s.

Big thanks must go to:

Look out for all the athletes who attended the camp to SMASH everyone who didn’t go at QB and beyond.”

My thanks go to Devon for taking this on while I tried to produce “the froth” for the QB sprint events!

Arguably the most interesting thing to come out of IOF in the last month is news of a complaint, arising from JWOC2018, made to the IOF Ethics Panel. The issue in question related largely to Facebook groups, common at JWOC, where teams make their own presentations in pictures and videos, some of which were judged to be inappropriate and could be construed as sexual harassment. An additional issue was the compilation of “Top 10” lists based on physical appearance.

While such things have, perhaps understandably in the closed environment of JWOC, been around for many years, the change in societal attitudes (for example, the Me Too movement) over the last 18 months or so means that IOF have taken the issue very seriously. The Ethics Panel recommendations to IOF included that there should be:

Perhaps the most important issue to realise here is that the Ethics Panel can, as in the second bullet point above, impose sanctions which may actually prevent athletes from participating at JWOC. The NZL team has been made aware of the standards that ONZ expects.

In common with the lull in New Zealand there has not been terribly much competitive activity amongst the overseas Kiwis during May. Tim Robertson came 2nd in the Finnish Näyttökilpailu Sprint in a field that, apart from him and the Swiss winner Phillip von Arx, was almost entirely made up of locals, while Kate Morrison has been in action in the latest Swedish League races. In Norway Lizzie Ingham regained her sprint mojo with a very impressive 3rd place in the Norwegian Sprint Championships, leading for most of the race until a single 20 second mistake pushed her back.

Also of interest, given her first WOC selection since Italy in 2014, was Greta Knarston’s 24th place out of a massive women’s field of 286 in the Innsbruck Alpine Trail Run Half Marathon. Not orienteering but still showing that the fitness is there in advance of WOC.

Greta. Lizzie and Kate, plus assorted others with Kiwi connections will be holding their own pre-WOC training camp in Norway in June/July. 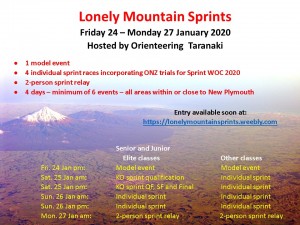 Internationally, the main feature on the horizon in June is the first round of the 2020 World up. This takes place in Helsinki from 8-11 June and consists of a middle distance, a chasing start long distance based on the middle results, and a sprint relay. With New Zealand’s only entrants being Tim Robertson and Lizzie Ingham there will however, be no NZL interest in the sprint relay.

Closer to home here is advance notice for the Lonely Mountain Sprints at Auckland Anniversary Weekend 2020. These will include trials for the first sprint WOC in Denmark and will be held in and around New Plymouth.