Notwithstanding the WOA and SI Champs, and the wrap-up from the Australian Champs, the main issue this month is (finally) the announcement and rationale behind the new Senior and Under 23 National Squads. These have been a long time in gestation (about 9 months actually!) but the birth is here and, hopefully, the start of a new era for HP orienteering in New Zealand.

Congratulations to the following who have been named in the National Senior and Under 23 squads for the year from 1 November 2015 to 31 October 2016.

* Indicates an Associate Member (see below)

These squads have been selected on the basis of agreed performance criteria. For the Senior Squad these are:

(2)     In the last 2 years to have been selected for the World Orienteering Championships.

For the Under 23 Squad criteria are:

(1)     In the last 2 years to have been selected for the Junior World Orienteering Championships.

(3)     Be a minimum age of 18 at some point during the year following squad selection (athletes not fulfilling this criterion but satisfying one of the others are named as Associate Members).

Selection in either squad is also dependent on being an active member of ONZ, and being prepared to help with organization of training activities and the coaching of others. Additions may be made to both squads during the year based on performances and/or selection for WOC or JWOC. However, selection in any New Zealand team is open to all and is not restricted to squad members.

Hopefully the benefits of being in these squads will rapidly become apparent with a joint (Senior and Under 23) camp in Hawkes Bay planned for the week prior to Anzac Weekend, and also dedicated camps for the WOC and JWOC teams when selected. Squad members will also be members of Regional Squads which will be announced by the end of November and also include others, both junior and senior, who aspire to National Squad membership but have not yet achieved qualification. It is intended that regular training and coaching outside national camps will be provided through the Regional Squads, and these will also provide a pathway for up and coming juniors (and others) to improve their orienteering.

As previously reported the New Zealand Schools team retained the Southern Cross Trophy at the Australian Schools Champs have a comfortable winning margin over Tasmania and ACT.

An interesting development out of discussions that took place over this week is the proposal that Regional Schools Teams may be selected to also travel to Australia from 2016. Although these teams would not be able to officially compete in the Australian Schools Champs, they would be able to run the same courses in the associated public races. This is seen as an important development in terms of allowing more of our up and coming juniors to have exposure to orienteering outside New Zealand. The reverse possibility of Australian teams coming to the Queen’s Birthday 3-day is also being explored.

At the Australian Champs themselves there were excellent performances throughout from Tommy Hayes and Ed Cory-Wright in M17-20E,  Nick Hann and Matt Ogden in M21E, and Renee Beveridge in W21E. Despite these the Pinestars-Bushrangers Test match went the way of the host nation.

Again as previously reported, the 2015 IOF World Cup, which began back in Tasmania last January, wrapped up at Arosa in Switzerland early in October. Although Lizzie Ingham was the only New Zealand representative in the last round, the races in Tasmania, in Norway/Sweden in early June, and at WOC in Scotland saw more New Zealanders than normal participate in the series. The overall World Cup winners, not for the first time, were Daniel Hubmann and Tove Alexandersson, but here are the finishing places of those Kiwis who made the top 100.

There was also a Sprint relay at three of the rounds of the World Cup, and after the first two NZL wa sin 11th place. However, without a team in Switzerland, although the final overall results do not appear to be on the web, we will have dropped somewhat.

In 2016 the four rounds of the World Cup include both the World Orienteering and the European Orienteering Championships. In addition the first round in Poland is a dry run for the World Games which will be held there in 2017.

As a possible taster for those aspiring to JWOC in Switzerland in 2016 the map below is part of the Women’s Long Distance course at the final round of the World Cup. This, as JWOC will be, was at an altitude of between 1500 and 2000 m. 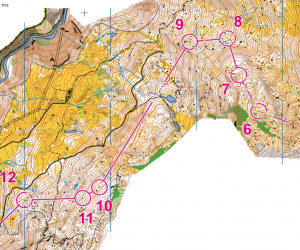 With NCEA and University exams on the horizon, both the WOA Champs on 17/18 October and the South island champs at Naseby over Labour Weekend drew somewhat smaller fields than usual in the elite grades.

The WOA Champs was notable, however, for the appearance of several of the “older” elites, several with toddlers in tow – somewhat of a reunion for Piret Klade, Bryn Davies, Penny Kane, Jamie Stewart, Karl Dravitzki and James Bradshaw. Piret showed that giving birth to twins has not slowed her down with 3rd placings in the sprint and long distances and a win in the middle distance. While Karl, James and Penny all also had top three placings.

At Naseby the most consistent performances came from Nick Hann and Gene among the men and Georgia Whitla and Sarah O’Sullivan in the women, although it is clear that mistakes were rampant in the complex gold mining terrain.

As some of you will have seen, Lizzie Ingham, Laura Robertson and Tim Robertson have recently been in Stromstad in Sweden checking out the sprint areas for WOC2016 before the full embargo comes into place on 1 November. The areas are a mix of urban terrain, with some complex areas of buildings, and wooded hills with scattered rock features and minor track networks. This seems to be a relatively common choice for sprint terrain in Sweden, and is quite similar in form to that used for the World Masters in Gothenburg in July. Also for WOC2016, for once getting in early, official accommodation has already been reserved!