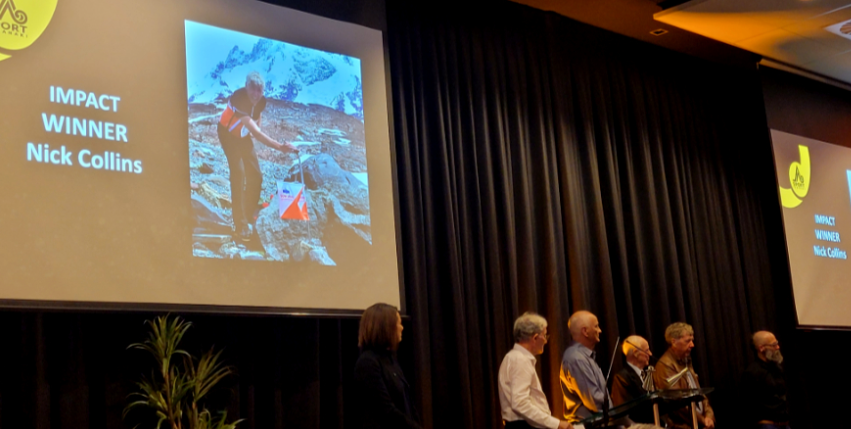 A few weeks ago Nick Collins won a 2022 Impact Sport award from Sport Taranaki for his motivational role in navigation sports. This award recognises Nick’s dedication to the sport over 30 years. We had a quick chat with him.

1.  You have certainly made sure navigation sports and orienteering gets due recognition amongst the sports that usually hog all the coverage. Congratulations Nick! Tell us more about the award, what did they mention about navigation sports and your contribution?
The impact award was for a major contribution to “Orienteering, Rogaining and Adventure Racing” over a long period of time.
Really I’ve just been ticking along doing lots of O chores like every one else, but the interface with Schools Adventure Racing is probably the noticeable activity that has given me a bit of exposure.
For the last 16 years, I’ve coached the NP Girls and Boys High schools’ adventure racing team to ten 1sts, five 2nds and a 3rd at the Hillary Challenge. That’s been quite an amazing journey.
I’ve also provided continuity in the TSSSA rogaine which has been running for 20 years and while numbers are now down to 500 or so, it was biggest secondary school event in the country for many years, attracting a little under 1000 students in its biggest year.
A lot of what we have done at Orienteering Taranaki has been quite strategic and was originally born from copying Hawkes Bay and the way they had engaged with secondary schools and how it had built their club.
Today our club has grown to 200+ members as a result.
Credit must go to our amazing committee who have supported my ideas with hardly a groan.

2  Nick we would like to hear more about how you got into orienteering and nav sports. What set you off on a passion for the sport?
Passion is probably an appropriate word. Annie was the orienteer, I was a white water kayaker, occasional climber, ski tourer and sailor. So I’m not sure the passion was really all about orienteering. It was more a case of Nick chasing Annie, and so chasing controls. I think the arrival of our daughter Heather was the biggest turning point, weekends with the boys on some remote grade 4 river became less appropriate and friendships with family-orientated orienteers became more important.

3. What do you think the sport has given you back over the years, and what do you still get a kick out of?
The sport has given me a connection with the community. Until I was 40, I spent a lot of my time working overseas or at sea. Not being from NZ, it takes time to develop a sense of belonging and orienteering provided me with the vehicle to achieve this.
I get a kick out of:
1. Beating Rob Garden
2. Watching people I’ve trained do well at GodZone (5 of the 10 top teams last year had Taranaki junior-ish racers)
3. Running accurately onto all of the controls and therefore achieving number one!

4. What would be your favourite or most memorable orienteering and navigation event?
The Swiss O-week is hard to beat. Orienteering at 3000m, the glaciers are mapped white with blue contours. Gasping for air while trying to maintain some pace and trying to deal with ridiculously complex bare rock and moraine in a vegetation-less moonscape.

5. You have been involved in all aspects of orienteering from mapping, planning, controlling to helping train groups for adventure racing and navigation. What have been some of the highlights?
Mapping is a lowlight. No skills, no patience. The Lonely Mountain Sprints was a highlight. Annie and I embraced sprint orienteering early while most of the other supervets still thought they were too old to do it. We liked what Duncan had done in Hawkes Bay and were keen to showcase our maps and attract a decent Australasian crowd to Taranaki. It was a difficult project and we wouldn’t have succeeded without Marquita coming on board. We asked her to control for us, but I may have forgotten to mention that this would be for 5 separate events. As it turned out, the event was great, 200 odd controls and all in the right place and lots of happy competitors. A quick plug, The Lonely Mountain Sprints will be back in 2024.

6. We’d love to hear about those events that are not so successful – we all have them.  We’re sure you have a great story we can learn from?
Annie thinks I’m a little injury prone due to my reckless attitudes. The Godzone, Queenstown may have been an example of this. It was the second last leg and we were on foot descending steeply down a boulder field gulley, when I took a misjudged leap to the next boulder. Unfortunately I landed on a flat stone which slipped away and I accelerated on downhill head first. I managed to turn in mid-air and slammed sideways into the side of a large boulder. Assessing the damage, from the ground, clearly a couple of ribs (which it turned out were fractured) and a big impact split in my left arm, with associated bruising. The team got me through the next few hours to the Transition Area –  arriving at dusk where we were to hop into our kayaks for the 50km paddle back to Queenstown. Rachel Drew suggested we rest till dawn to give me a chance for recovery, but Viv Prince, was made of tougher stuff, “Get him in the kayak or he’ll seize up overnight”  she instructed the team. (I’ve often reflected on her empathetic approach). Fortunately, Doctor Tom Reynolds was there and he sewed me up and off we went for a memorable all night paddle and a 4th place in the Pursuit. I’m sure there’s something to learn from the story? Don’t be reckless? Do be determined? Pick your team mates carefully?

7. Is there a favourite event you have planned and/ or controlled? What do you love about planning events?
I’m really not a great setter although I’m working on that now. I’m more technician than artist so I do better at controlling. I think setting has become much better in recent years as we all try to use smaller pieces of map without compromising quality. At Taranaki club events we are starting to have a bit more interest with embedded rogaines, butterfly loops, mazes and so on. Latest plan is for a long-O with embedded sprint sections. I think what I am saying is that at the club level, its important to create a diversity of events that challenge navigators in different ways. Some will be a flop, but that’s OK.

8. What is the most remote event you have been to?
That’s easy, it would be the Northern Territory 24hr rogaine champs sometime around 2005. Annie and I arrived in our O-kit ready to go. The other 75 or so competitors were all dressed like Crocodile Dundee with snake gaiters, cork hats, boots, you get the idea. The briefing was  an eye opener. If there’s a lightning storm, fires are a risk, head downhill, but don’t enter the swamps as there are crocs. Watch out for the aggressive pigs, don’t lean on the trees as the green ants will eat you and shine your torch up and down stream on the creek crossings (crocs again). No one mentioned the Orb spiders, they are around 15cm across and sit in the middle of webs hanging at head height between trees. Nothing quite like the feel of trying to get one off your face at 2 in the morning. Despite the challenging wildlife, it was a great event and as none of the Crocodile Dundee sorts seemed up to navigating, we walked away with the main trophy.

9. What are your next goals, or events coming up for you?
Having ripped my hamstring off my pelvis at an adventure race (no I wasn’t being reckless), I’m currently concentrating on post-op rehabilitation. So far so good. I’ve entered the 24 hr Rogue Raid in Qld next April and will then head to Europe. Key races are the Czech 5-day MTBO and the Swiss 5-day. We’ll see if I’m ready?